The collapse of the publishing industry

The New York Times missed the real story when it wrote about a nonexistent decline in ebook sales. Unsurprisingly, Fortune manages to do rather better in observing that the decline is limited to the traditional publishers, who are losing out to their smaller rivals:


A recent piece in the New York Times about a decline in e-book sales had more than a whiff of anti-digital Schadenfreude about it. The story, which was based on sales figures from the Association of American Publishers, implied that much of the hype around e-books had evaporated — with sales falling by 10% in the first half of this year — while good old printed books were doing better than everyone expected.

This was celebrated by many as evidence that e-books aren’t all they are cracked up to be, and that consumers are swinging back to printed books. But is that an accurate reflection of what’s actually taking place in the book-publishing or book-buying market? Not really, as it turns out.

When I first saw the story, I thought it raised two important questions, neither of which was really answered conclusively in the piece (although the second was hinted at). Namely: 1) Are e-book sales as a whole dropping, or just the sales of the publishers who are members of the AAP? And 2) Isn’t a drop in sales just a natural outcome of the publishers’ move to keep e-book prices high?

Data from the site Author Earnings, which tracks a broad spectrum of information related to digital publishing, suggests that both of those things are true. In other words, a decline in market share on the part of established publishers is being taken as evidence of a drop in e-book sales overall, and at least some of the falloff in market share that publishers have seen is likely the result of high e-book prices.

What's really happening is that overall sales are remaining close to flat, but the mainstream publishers are rapidly losing out to small and independent publishers. I jazzed up Hugh Howey's Author Earnings report to make it more obvious what has been happening over the last 15 months, which just happens to coincide with the birth of Castalia House. 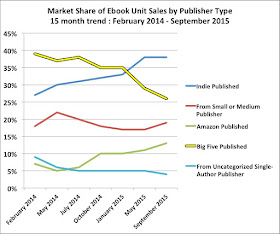 In other words, the share of ebook sales that belong to the major publishers have plunged from 39 percent down 26 percent due to the rise in ebooks published by Independents and Amazon itself. This is due to several factors, ranging from increasingly mediocre authors being signed by the editorial staffs to foolish pricing decisions by the business people.

I suspect the decline in the self-published category was initially due to Amazon skimming off the best of them, followed by the change in Kindle Unlimited rules that deter the publication of very short ebooks. The KU change probably also explains why Indie growth has leveled off since May.

To put it into more personal terms, and to explain why Tor will continue to have John Scalzi running himself ragged on non-stop book tours until his contract is eventually canceled prior to its completion, consider the following comparison between several recently published books. All the numbers were current as of 6:30 AM EST.

This is interesting because what it tells us is that the only people interested in reading Scalzi's latest are his longtime fans who are completing the series. They're buying the hardcover to round out their collections, but the casual readers aren't even bothering to read it. Lock In, on the other hand has shown more appeal to casual readers, but it's not particularly popular, especially for one of Tor's top authors. Scalzi is far from a failure; he's #54 in Kindle eBooks > Science Fiction & Fantasy > Science Fiction by virtue of all his books selling reasonably well. I am merely #329.

But then look at how well other indie authors (and RTRH contributors) such as B.V. Larson (#13 in SF), Christopher Nuttall (#25 in SF), and David van Dyke (#99 in SF) are doing without the support of the largest publisher in science fiction.

This is a serious problem for the major publishers because ebook sales are a literally less-than-zero-sum game at this point in time. Regardless, it's not so much the direct competition that threatens to do the big publishers in as it is the new X-factor in ebook sales, which is Kindle Unlimited. Notice which two types of publishers have been doing well since the KU change: Amazon and Small to Medium Publishers.

For an explanation, consider this book, which competes directly with Scalzi's "military science fiction", Back From the Dead by Rolf Nelson.


BACK FROM THE DEAD
9 reviews

What is astonishing about the moderate success of the Nelson book is that it has "sold" 4x more books via Kindle Unlimited than it has through conventional book sales. Keep in mind these aren't just "paid" sales, they are books that have been downloaded and read. 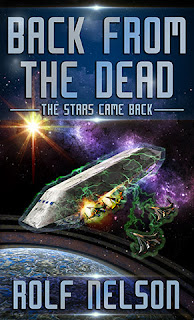 KU works very well for longer, inexpensive indie books; with his book's KNPC, Rolf makes more money from a KU read than he does from an Amazon sale at $4.99. (NB: This isn't confidential information, it's all right there on Amazon for those who comprehend the system.) But more importantly, most of those KU readers are not Castalia fans, they are mostly new to Rolf's work.

(By way of testing this hypothesis, I've added a page to Back From the Dead letting readers know about other Castalia books available on KU. If I'm correct, this should have the result of increasing the average Kpages read for the other books listed.)

KU is Amazon's real challenge to the mainstream publishers. It was bad enough for them competing on a level playing field with ebooks that cost one-half to one-fourth the price of their own ebooks. But how can they possibly compete with all-you-can read for $10, especially when Amazon is going out of its way to promote those books? For the price of one-third of a new Tor ebook, you can read literally dozens of KU books such as Riding the Red Horse, A Throne of Bones, On War, and Back From the Dead, many of which are objectively better than the Tor books, at least as far as the Amazon ratings and reviews are concerned. And the problem for the major publishers is only going to get worse as the KU readers discover new favorite authors, and new publishers, and begin to read their way through their non-mainstream catalogs.

Ebooks were disruptive, but KU is going to cause several of the major publishers to go out of business. The Big Five will be the Big Three inside three years.

That being said, there is observably a distinct type of KU reader. They clearly prefer lighter, faster-reading fiction fare; while SJWAL has sold 5x more copies so far this month than Back From the Dead, the latter has 3.7x more KU pages read.
VD at 11/10/2015 08:00:00 AM

Rules of the blog
Please do not comment as "Anonymous". Comments by "Anonymous" will be spammed.