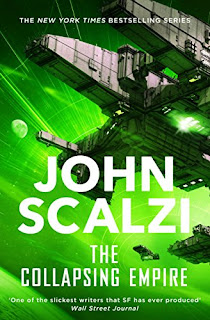 I think we can safely assume, on the basis of this UK cover, that Tor Books is going to be purchasing another dubious one-week appearance for John Scalzi on the New York Times Bestsellers List.

I mean, who could doubt that a book that has been reviewed so positively will fail to meet with anything less than overwhelming enthusiasm from the science fiction book-buying community?

Readers might wonder whether Scalzi can write another space opera that shares the elements that made his Old Man’s War series so popular but be sufficiently different to feel fresh. Both include political plotting, plenty of snark, puzzle-solving, and a healthy dose of action, but there’s just enough here that’s new for this to avoid becoming a retread. There’s nothing groundbreaking, but you’ll still want to find out what happens next.
- Kirkus Reviews

Unless you've been a professional reviewer, you may not be able to read between the lines well enough to understand what the reviewer is actually saying in his review. You see, when you want to say something positive about a mediocre book, but also want to avoid completely sacrificing your credibility, the trick is to say nice, cute things about the author that he can run off and happily quote, while assiduously avoiding any overly positive statements about the book itself that will come back to haunt you once the readers discover how mediocre it is.

But that's neither here nor there; the fact that McRapey wrote another snarky mediocrity is hardly a surprise. The real question is: how could Tor Books possibly know, six weeks before the first book in the series is published, that the forthcoming series can be described as "The New York Times Bestselling Series"?

UPDATE: Amazing. Tor Books has somehow known that The Collapsing Empire would be a New York Times Bestselling series since June 27, 2016, 10 months prior to its scheduled release! That must be some killer psychometric prediction software they've got there. That, or they've already set aside the cost of a one-week "bestseller" in the marketing budget.
VD at 1/31/2017 11:00:00 AM